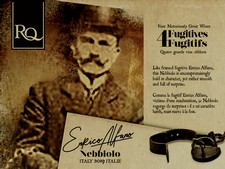 Considered a leader of a mafia-type group called the Camorra; Alfano was rumoured to have been responsible for the murders of a New York City police sergeant and a rival Camorra boss, Gennaro Cuocolo, and his wife. Many considered Alfano in the light of a demigod, as he was thought to be invulnerable to bullets and able at all times to escape his pursuers. Unfortunately, he was caught and a trial against Alfano expanded to a tribunal against the Camorra, where he was found guilty. He maintained his innocence, and after the illegitimacy of the trial was discovered, he was released after serving 27 years of a 30 year sentence. After his release in 1934, he was never seen or heard from again.

A unified transparency and delicate appeal that collaborates well with its robust and hearty counterparts. These are the true markers of both a leader and a great wine!

This dry wine unveils aromas of black and red berries, black pepper, and spices from oak. On the palate, it presents woody flavours and polished tannins for a bold finish.

Connect with others on crafting wine.